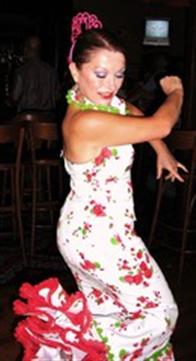 From her birthplace in Croatia and her Russian and Mediterranean grandparents, Maya brings an earthy gracefulness to Flamenco. Her lifetime dedication to dance began at a young age with native folk styles. She then continued with ballet, jazz, middle eastern and modern dance, in which she holds a bachelor's degree from U of I in Urbana.

Upon seeing one of Jose Greco's concerts, Maya became an aficionada of Flamenco. After leaving Urbana she sought out a channel into the Flamenco world and found the honorable Jose Castro, who was then one of the only representations of this fantastic art form in Chicago. Subsequently, she studied with Susana diPalma, Manolo Rivera and Edo Sie. She then made numerous trips to Spain to live and learn from such masters as Ciro, Manolo Marín, La Tati and Carmela Greco.

In Spain, Maya performed at the famed Molino Rojo. She toured the US with the Boston Flamenco Ballet, Zorongo Flamenco from Minneapolis and Art España in Chicago. She made a national appearance with Jose Greco and his Ballet de Madrid. Maya's exquisite dance style has landed her main roles in the Opera Carmen, in the Passion Play at Chicago's Opera House, and in George Gershwin's Rhapsody In Blue in Kansas City. She starred as Esperanza in the Flamenco Ballet "Guernica" at the New York Joyce Theater.  The production was Choreographed by Susana of Zorongo Flamenco and was inspired by Picasso's Guernica painting.

Maya's passion for the art of Flamenco has compelled her to incorporate Cante into her already stunning repertoire. Her Chicago-based group, Lucero Flamenco, performs at numerous shows and events throughout the area. She is also featured regularly at the upscale Meson Sabika in Naperville. In addition, she collaborates with Flamenco guitarist Mehran and his progressive rock group, appearing periodically at Mayne Stage, Uncommon Ground and Martyrs'.